skip to main | skip to sidebar

What a challenge for the guys in the coming year. A look at the schedule shows the 2008 canes might face their toughest schedule we have seen in recent memory.

Even though things didn't go so well last week, it was still a good season. Good luck at the next level Seniors.

Cartersville wins again with a 7 - 0 victory in 7 innings over Central Friday night. A good crowd from Cartersville followed their team to Carrolton and saw a good hitting and pitching performance.

Canes break into the Top 25 in the Nation


The Cartersville Hurricanes continue to impress around the nation. For the 1st time the #1 AAA team in the nation is now included in the Top 25 in the Nation overall by rising to #24 from #28.

The Canes face Sandy Creek tonight at Home in another region game.

Canes steal one from Cass

The Canes stole one late in the 7th inning after being down 2-0. Despite Cass having only 1 hit on the Canes through 6, Cartersville trailed before eventually taking the lead after a pitching change. Cass was unable to move any runs across the plate in the bottom of the 7th.

Cartersville will face Harralson County in a make up game this Thursday 4/12 at Richard Bell Field at 5:30pm.

From the Daily Tribune Below:


Chester, who is in his 10th year as the head coach of the Canes, was surprised at a celebration the team had for him when they got back to the Cartersville baseball complex.

"All it means is that I'm getting old," Chester said jokingly.

"Coach Chester provides stability and consistency with this program," said Cartersville principal Jay Floyd. "He knows he has the community's support."

Chester said he's nothing special and that any coach could reach the same milestone in the Canes' program.

"With the type of players we've had in this program and the support we've received in the community, it's easy to get a lot of wins," Chester said.

As the celebration went on, assistant coach Kyle Tucker and senior outfielder/pitcher Lyle Allen snuck up behind Chester with a 10-gallon cooler of water and drenched him.

"I didn't know what hit me," Chester said. "I thought a plane crashed.

For people outside of the Cartersville program, some might say Chester is mean, whereas his players say he places high expectations on them, and for good reason.

"He expects a lot out of his players," said former Canes' third baseman Tyler Gilreath. "He expects us to do our best and doesn't accept anything less."

"The kids know he has high expectations," Floyd said. "They respond to it as well."

"I'm hard on them, there's no doubt," Chester said. "But I do that for two reasons -- I love these guys and I want them to get better. I want them to use what they learned here later in life."

The relationship Chester has with his players is something they say not many people know about.

"He's a good friend," Allen said. "When we're on the field, it's all about baseball. But off the field, if you need to talk to him, he'll listen. Not a lot of people see that. He shows us that he cares."

Chester said the relationship with the players is the best thing about the job.

"I'd be lying and saying that winning isn't great," Chester said. "But the relationships you develop with these players is the biggest joy of the job."

But Chester hesitates to take credit for the success of the program.

"It's not about me," he said. "It's about these players. They are the focus."

This year, the Canes have also attained their highest national ranking ever, as they are currently ranked No. 28 in the nation and No. 1 in Georgia's Class AAA.

Canes rankings getting even better

The Canes moved up to #28 in the Nation today overall and #1 in AAA team in the nation according to Baseball America. Also, the Canes are ranked #2 in the State of Georgia overall only behind #1 AAAAA Kennesaw Mountain High School.

The acolades just keep rolling in. What a program guys. Keep working hard.

Canes improve to 2 - 1 by beating McEachern

The Canes beat McEachern, 2-1 in a night of few hits and good pitching from both teams. Cartersville sent 5 pitchers to the mound in an effort to most likely conserve arms for this coming weekend. Lyle Allen started, and followed with Chris Huth, Ben Bridges, Cody Nix and closed with Benji Farr. The lone run for the Indians came in the 6th off a hit against Nix scoring a previous runner from an error on a ground ball by 3B Cole Payne.

The Canes game vs. Gordon Central set for March 1st has been postponed due to rain. The game has been rescheduled for Saturday at 1 p.m.
Posted by Blogger at 6:13 PM No comments:

The game @ Gordon Central which has been postponed due to rain, has been rescheduled for Saturday at 1 p.m.

The game tomorrow at Milton is still on. Directions will be posted soon.
Posted by Jacobhawkins at 5:00 PM No comments:

Game canceled Due to Rain

Date and Time of todays game with Gordan Central  Reschedule will be posted as soon as available.

Stay tuned for updates on the Weather for tonights Game.

VilleSquad.com up and Running - See our Links Section Below

The Unofficial Site for Cartersville Baseball is now up and running. Check it out. The blog will also keep going and be used for fast updates to scores, games changes, "during game" scores and news.

Of course your comments are always welcome.

Both teams threw a lot of pitchers and everyone got in the game for the Canes. Not a bad day.
Posted by Blogger at 12:26 AM No comments:

There are limited directions for Saturdays Game. Google and all the online services show from Cartersville, taking 75, 85, 985 etc.... which is way out of the way.

The best option is Hwy 20 to Canton. Stay on Hwy 20 to Hwy 369. See the pic of Google directions. It will take about 1 1/2 hrs to get there from Cartersville.

The high school website is not printing properly. This is a clean copy of the website schedule. Of course games are always subject to change, we will try to update the blog for any changes.

The JV Site is Up

See the links list to the right for the JV Blog
Posted by Blogger at 12:16 AM No comments:

Anyone interested in pics being posted you can email them to purple.hurricanes@gmail.com

We will post pics of the Freshman, JV and Varsity. This blog will be varsity only. There will be 2 sister blogs for Freshman and JV.

You can email game info and events also to above as well as post your own comments each day.

Its Over - Posts are Made

Posting are up. Practice begins Monday @ 10am for Varsity

So.
Donavan Tate * pending tryout due to injury 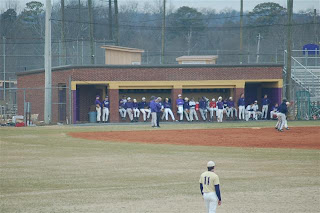 One more day of tryouts to go. Sat from 12-3pm they will go at it one more day.
Posted by Blogger at 8:07 PM No comments:

A live scrimmage is planned for tomorrow weather permitting.
Posted by Blogger at 7:34 PM 2 comments:

Good Morning! It is very cold this morning. Fortunately there isn't any precipitation. Temperatures are in the mid 20s in the metro area, and in the low 20s to upper teens in the mountain counties. These numbers won't drop much more this morning. However, don't expect much of a warm up today, and it is going to get colder tomorrow morning.

Freshman and Sophmores at Sports Specific and Upper Classman at Richard Bell.
Posted by Blogger at 4:11 PM No comments:

It looks like baseball tryouts weather. The guys will have to keep moving today. Thank goodness for indoor facilities.
Posted by Blogger at 7:45 AM No comments:

Day Two is in the books. Day Three should be good.
Posted by Blogger at 7:21 PM No comments:

The tryouts are as follows:

Freshman and Sophomores are at Sports Specific

Jr's and Seniors are at the Fields.

It looks like it will be hard for the Canes to take the field this afternoon.  Stay tuned for location information on tryouts.

It was a great afternoon and evening for tryouts.  The weather was nice (mid 50's to mid 40's) and the turn out was good for the 2007 Canes.  It was an afternoon of fielding capped off with an evening of running at the end.  The weather does not look so good for this afternoon so an indoor tryout might be in store for today.
Posted by Blogger at 8:56 AM No comments:

Today it all begins

The weather is nice and the turn out should be high today for the annual rite of passage for many young ballplayers at CHS today. At about 4pm, Richard Bell field with again be alive with the sounds of leather popping, bats pinging and the chatter of players talking it up to each other.

The Canes return a strong starting lineup and look forward to adding new players to this years varsity group. There are strong players coming up from JV and new (future Canes stars) rising in the Freshman class. By Friday or the weekend we should know who the "players" for the 2007 season should be.

The fans are looking forward to a good run this year and hopefully going deep. 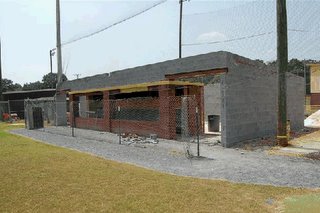